Recently, a friend of mine posted a photo of this gospel LP on Facebook and I could hardly believe my eyes.

Here it is: The Faith Tones “Jesus Use Me” 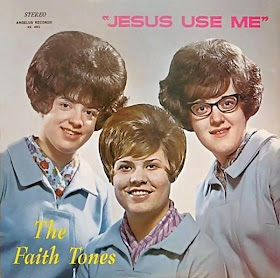 Could it be real? I began investigating.

It turns out that, yes, there was an album released by The Faith Tones with the title, Jesus Use Me, by Angelus Records in 1964 (WR 4802).

The Faith Tones became a quest. I had to know more.

Fortunately, I have a buddy who used to work for the CIA, is now a private investigator and also joined in on my quest.

The Faith Tones are real. Those are not men in drag. That’s really them, bouffant and all. 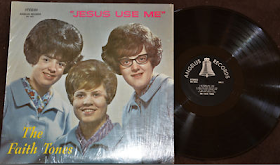 As my buddy and I went to work, details of The Faith Tones began to emerge.

The Faith Tones began as a gospel quartet during the spring of 1963 in the Winston-Salem, North Carolina area. The group originally consisted of Beverly Beecham (one the left with the bouffant), Vivian Wyler (middle), Marie Samuels (with the glasses) and Roberta Long (not pictured).  They soon became a trio probably due to the fact that Roberta Long, a newlywed, gave birth to her first child soon after the group began.

The remaining trio of Beecham, Wyler, and Samuels were all single working women in their early twenties, thus, many evenings were available for rehearsals. All of the women  were trained church musicians, accomplished pianists and organists, and were members of the Lottie Moon Missionary Baptist Church in Winston-Salem NC.  Their combined talents, along with their availability, proved to be quite productive. They quickly became a much sought-after group among numerous Southern Baptist churches often lacking in talented or inspirational musical devotionals in the area.

Apparently, their talent lay in the fact that they were all trained pianists; vocal abilities were secondary. At any performance, one of them could supply accompaniment on a piano or Hammond organ while easily supplying a third vocal harmony – a feat seldom accomplished in any Southern Baptist church at the time.

It was at that time that Angelus Records was making a great deal of revenue from releasing multiple recordings of Negro spirituals after the “March on Washington” in April 1963. Numerous talent scouts were in the Washington-Virginia-North Carolina area and it was only a matter of time until the  Beecham-Wyler-Samuels trio was heard.

Performing their popular gospel song, “Jesus Use Me” one week after the assassination of John F. Kennedy, probably caused their pastor, Br. John W. Buckner, to announce in a following sermon something like, “these devout women truly sing the inspirational tones of faith.”  --

While their popularity was rising among local churches, an agent from Angelus Records was in attendance.  Perhaps he heard the "inspirational tones of faith" sermon where they had performed and came up with "the faith tones" as a name.

A 45 rpm recording of “Jesus Use Me” by The Faith Tones was released to local radio stations in North and South Carolina in January 1964. It was met with wide acceptance and rose to No. 14 on the East Coast Gospel Chart at its highest rating the following month.

The chorus is still popular among many televangelists. You can here Jimmy Swaggart performing it here.

Jesus use me; Oh Lord, don’t refuse me,
For surely there’s a work that I can do;
And even though it’s humble, please help my will to crumble
Though the cost is great, I’ll work for thee.

The “B” side to The Faith Tones 45 rpm release contained an obscure 19th century Protestant hymn, “Where Is My Boy Tonight?”

Where is my wandering boy tonight—
The boy of my tenderest care,
The boy that was once my joy and light,
The child of my love and prayer?

Soon after, local demand and popularity called for an LP of The Faith Tones.

It turns out that the original members of The Faith Tones performed in hundreds of non-denominational churches across the Southeastern and Southern U.S. for the next eight years up until 1972.

The last known documented performance of The Faith Tones took place on October 26, 1971 during a week-long revival celebration at the Tyro Baptist Church in Lexington, North Carolina. 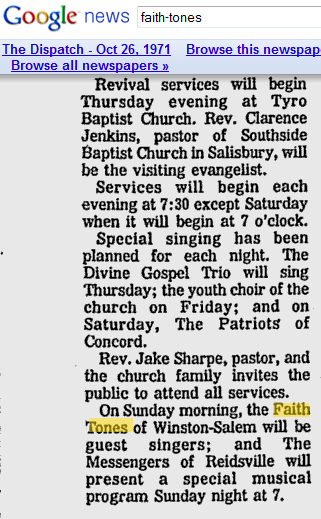 Like I said, my buddy, a private investigator, and I did quite a bit of sleuthing and can now supply details for those of you who would like to know about the members of The Faith Tones. 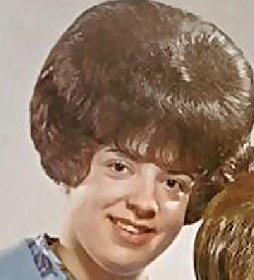 The eldest of four siblings; although the daughter of Disciples of Christ parents, she was educated in a private Catholic school. We found her Sophomore year class photo! Beverly is on the front row, fourth from the right. 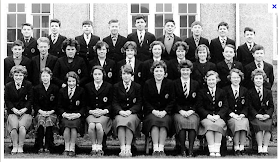 Beverly’s parents converted to Southern Baptist when Beverly was sixteen years old. She obtained a music scholarship to North Carolina State University but apparently dropped her studies after three years in 1959. She applied for marriage license the same year but never married. From 1960 through 1972, she earned very little income aside from occasional royalties from a subsidiary of Angelus Records.
In 1972, she applied for a three-month visa sponsored by the Southern Baptist Association to teach in Burma (now Myanmar). She remained in Burma/Myanmar as an undocumented worker until returning to the U.S. in 2004 at the age of 66 whereupon she applied for a marriage license to marry a same-sex partner in Massachusetts.
She remains married and employed as a private music instructor in the Boston area. 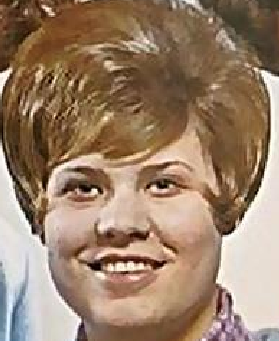 Orphaned until 1944. Adopted by parents, aged 39 and 44 years old in Dover, Delaware.  Obtained B.A. in applied music from Oberlin College in 1961. Resided with parents in Raleigh N.C. until 1963. Employed as cosmetologist in Winston-Salem from 1963 to 1972. Received royalties from subsidiary of Angelus Records through 1972.

Here we go! (The good stuff)
Civil court records filed in 1974 document numerous hotel monetary records with a named companion who was a NASA astronaut. (No names here). He was slated for one of the later moon missions that had been cancelled. Apollo 18, 19 or 20. But, Ms. Wyler moved to Houston in 1972, had an Order of Protection placed against her by Mr. X, the astronaut, and subsequently moved to Beaumont, Texas.
She opened a hair-weaving salon in 1975, innovative at its time in East Texas, which was very successful until hair weaving refugees inundated the Beaumont area after Hurricane Katrina in September 2005. 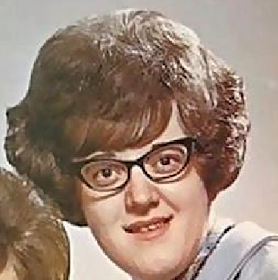 The eldest of 18 children born to Southern Baptist parents from Springfield, Missouri, who were influential in creating the “Quiverfull” notion of multiple offspring that would infiltrate society with like-minded conservatives.
Although Marie was the eldest child of eighteen siblings in a family of fundamentalist Baptist parents who espoused an insular, almost cult-like devotion to the familial cloister, she somehow obtained a full music scholarship to North Carolina State University, probably against the will of her parents. Though she was the eldest of eighteen, she was the youngest of The Faith Tone members at nineteen years of age.

During the next seven years of The Faith Tones’ heyday, Marie worked at a minimum-wage night-job supervising children with Down syndrome while working toward her Master’s and Doctorate degrees in Music Composition at University of North Carolina at Chapel Hill. Both degrees, she eventually obtained.

In retrospect, the seven-year success of The Faith Tones would never have been possible had it not been for the quiet, diligent compositional work of Marie Samuels;
She obviously refrained from any and all romantic involvement, devoting all her time to her work with disabled children and toward her music studies.

In 1974, she signed a lease with a young product engineer employed by 3M, apparently having fallen in love. Two months later, she sought medical treatment suspecting complications from a possible unexpected pregnancy.

Marie died from complications during surgery when a parasitic twin, a fetus in fetu, was discovered in her abdomen and surgeons attempted to remove it. She died from trauma and blood loss at the age of twenty-nine.

So, there you have it, folks – the complete history of The Faith Tones.
When you think about it, their lives pretty much exemplify what we all experience.

Beverly: An average life, hopeful, escaping reality, ended up like she never expected.

Vivian: Worked to overcome her past. Became successful; fell in love; and failed. But it’s not over yet.

The Faith Tones and their legacy album "Jesus Use Me" may look perplexing, and even ridiculous on the surface. But when we dig deeper, we can never know whether or not our lives will turn out to be that of Beverly’s or Vivian’s or Marie’s.

But while we’re here, just for today, we can revel in what we’ve got.

By all means,
Let’s relish all we can with our own Faith Tones!

(Please note: The preceding article was an exercise in fictional creative writing.)

UPDATE!!
I actually got my hands on a mint-condition LP of "Jesus Use Me". One came available on eBay and I sniped it! So, here you go, folks! An actual recording of the lovely Faith Tones performing "Jesus Use Me".

If you enjoyed this, you'll love my newly-published book of satire now available on Kindle. Click here to get yours today for only 99 cents 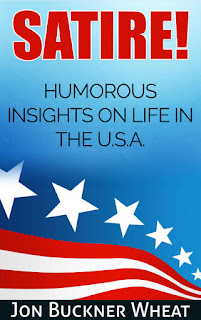